You bet we're excited about this season...

The Masquers depends on the generous support of local corporations, businesses and people like you.  Learn how you can help us continue to stage some of the best theatrical shows on the lakeshore, and preserve the Oldest Continuing Community Theater Group in the state for generations to come.

Our pre-season ticket sales have been suspended due to the uncertainty caused by the pandemic.  We will be announcing ticket availability and venues for our first two shows in advance of each show.  Hopefully, we will be back to normal beginning with our 91st season.

Beginning in 1987 we became one of the charter Arts Partners for the newly renovated Capitol Civic Centre in downtown Manitowoc and have called this beautiful theatre our home performance venue for over 30 years.

The Masquers, Inc. has been a leader in the Manitowoc arts community since 1931. A non-profit organization, we lay claim to the title of one of Wisconsin's Oldest Community Theater Groups. Throughout our history we have produced at least two shows every season for the last 89 years. Our latest offering includes The Spoon River Project, The Marvelous Wonderettes, and Clue.

In 1944 The Masquers purchased the original coach house for the Rahr Mansion, now the Rahr-West Museum. The Coach House has been our home for auditions, rehearsals, costumes, set pieces and club meetings ever since. Beginning in 1987 we became one of the charter Arts Partners for the newly renovated Capitol Civic Centre in downtown Manitowoc and have called this beautiful theatre our home performance venue for over 30 years.

In this year of constant changes we have one more change to announce.  The Marvelous Wonderettes was scheduled for production in the first two weekends of March, but due to the virus and complications with the venue the show has been rescheduled for two weekends in May at the Historic Forst Inn in Tisch Mills.  Our hope is that this will make it possible for more people to see our final production of this 90th season.

You can read more about this by clicking the link below.

Every once in a while the weather creates more problems than we anticipate.  That was the case recently at the Masquers Coach House.  Our boiler stopped working and the temperatures inside the building dropped to a chilly 40 degrees.  Fortunately, we thought, the problem was discovered in time and repairs were made. 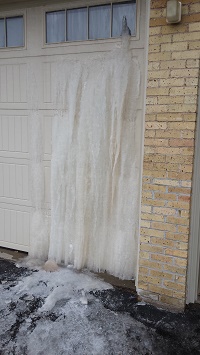 Several days later during a routine check of the building we discovered that heating pipes in the rehearsal space on the second floor had burst creating a steady rain of water throughout the west end of the building.

Damage includes the floor and walls of the rehearsal room, ceiling, insulation, and inventory damage in our scene shop on the first floor, and damage to our scenery inventory in the basement.  Additionally, the ceilings in two more costume rooms on the second floor received moisture damage.

The insurance adjuster and our contractors agree that it may take up to a year to restore the building to its former condition.

The Masquers current president, Claran LaViolette, was quoted in the newspaper saying "After nearly 100 years of consecutive shows, we won't stop now.  We have lots of work to do cleaning up everything, but we will get through it."

Those looking to help the Masquers can donate by clicking the button below.

"We're thankfull for the community support we have had over the years." LaViolette said.  "We look forward to a great season this year once the pandemic is over."

Volunteer with The Masquers!

Are you looking for ways to get involved in theatre? The Masquers always welcomes volunteers on stage, off stage and everywhere in between. Click below to learn more!

Our shows are well attended and our patrons are loyal to all of our supporters. See what placing an advertisement in our show programs can do for your business. Or, investigate becoming a Theatrical Sponsor or Corporate Sponsor. Either way you will be doing your part to preserve The Masquers and keep community theater alive on the lakeshore.

The Masquers, like all other groups, thrives on its members.  It takes a Coach House full of members to make our dreams a reality.

Membership in The Masquers means you will be close to other people who share your passion for theater, and since we're not all performers, your unique talents, whatever they may be, will be welcomed and appreciated.

We meet at our home, The Masquers Coach House, the third Thursday of every month from August through June.

Learn more about who we are and what we can offer you by checking out our membership page - Join Us.